Teardowns are big in my neck of the woods – what little woods there are left.  They started about 25 years ago, when a few people, impressed with the fast train commutes and proximity to major expressways, dared to knock down spindly, termite-infested wood frame houses from the 1910s to put up tasteful brick houses. Then, they started telling their friends.  Then, the developers started pricking up their ears. Suddenly, the town was booming, quite literally, with the sounds of earth movers, bulldozers, jackhammers and the yammering of newly minted interior designers teetering on their Jimmy Choos.  My town became a mecca for anyone whose fortune was roughly the same vintage as a bottle of Two Buck Chuck, but was sufficiently large, thanks to the Internet Boom, Real Estate Boom, or the advent of hedge funds, to construct a Dream House.

There was the French Country era, in which many McMansions sprung out of the ground looking like something you might find on an ersatz Provence tourism video. Now, the pottery roosters that used to grace Distressed Oak kitchen tables are crowing on card tables at garage sales.  Pierre Deux upholstery has gone Duh.

Then arrived the Faux Victorians, that tried and sometimes succeeded in imitating the 120-year-old creaky ancestral manse down the block.  Then came the Coastal Homes, bloated shingle-style lot-eaters sporting too many weather vanes and resembling something Stanford White might have designed while ingesting too much champagne. The brilliant Mr. White, murdered in his prime by a jealous husband, might also have noted that the nearest coast is 20 miles away, making these houses just un peau incongruous.

There were even a few new palaces straight out of the Arabian Nights.  One of these was built by a man who purportedly owned a chain of dental clinics. Once the mansion was completed, the not-so-good doctor realized he’d blown his budget and fled to the Middle East, leaving his creditors toothless.

A couple of years ago, a new breed started to rise from the hard, unforgiving clay that once enveloped 1960s ranch houses or 1860s Italianate villas.  It was something people hadn’t seen before except possibly in a trendy decorating magazine. The wood siding is vertical!  The windows are also vertical and trimmed in black!  They have no shutters!  If there’s any kind of stone trim, it’s all the same kind of stone!  And they’re all white!  It appears that after the first few were built, my town apparently issued an edict mandating that all new-construction homes going forward must look exactly like these Transitional Homes, the name used most frequently in describing these now-ubiquitous structures. 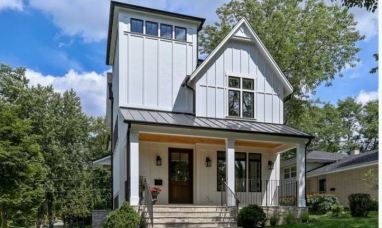 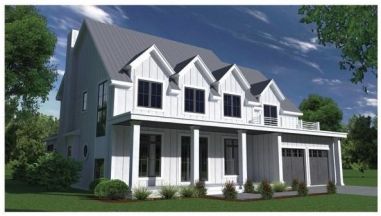 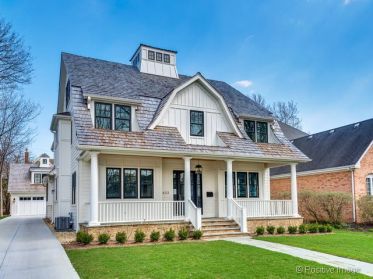 The photos shown above are from real estate listings I perused as I wrote this post. With 316 single-family homes currently for sale in my town, some 15 are of the Transitional Home, or, as described in one listing, the Trend-Setting Farmhouse variety. Gosh, if I were working my fingers to the bone on a farm, I’d sure as heck want to make sure my house was Trend-Setting. I didn’t include all of the photos, because they all tend to look the same after a while. Same reason there are no captions, because they too would be interchangeable. Interesting?  They were, before they started appearing on every block.  Contextually appropriate?  Not now, but I guess they will be soon, because it seems like every third house in town will be one of these Transitional or Trend-Setting Little Boxes. Treasure Houses?  I’m thinking not.  They will be teardowns 50 years from now.