A Chicago belle from a wealthy founding family marries a dashing sportsman from another prominent family. While living on Prairie Avenue, once known as one of the city’s most enviable addresses, she becomes acquainted with her neighbor.  The gentleman is married to a woman of beauty, intelligence and strong character, but the marriage has been foundering for years. Divorce is unthinkable, given the social stature of the parties involved. The gentleman? Marshall Field.  The lady he came to love? Delia Spencer Caton.  That she was at least a close friend and eventual wife of the legendary retailer is impressive. The rest of her history, often ignored, is amazing. 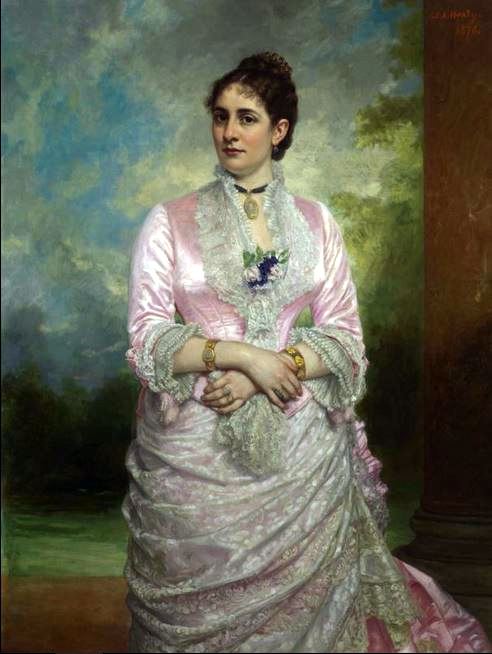 The portrait of Delia in her younger days reveals a lovely, self-confident woman wearing an exquisite and expensive gown. The dress seems to have been composed of many yards of ruched silk, with a lace-overlaid skirt. Delia’s hair is intricately curled in delicate ringlets. She wears earrings, a cameo choker and two gold bracelets. Her hands feature three rings. A nosegay is strategically placed at a low neckline. She is not thin, nor is she overweight.  Her face must have been the most intriguing element for Healy to capture, and those who had sat for him included Henry Wadsworth Longfellow, Daniel Webster, Franz Liszt and Henry Clay.

When Healy painted the portrait of Delia before his death in 1894, he saw a woman who was much more than her elaborate clothes and jewels. She may not have been an impeccable beauty, but she had a compelling, beguiling presence. She appears to have a bit of flesh below her chin. Healy recorded shadows below her large, expressive eyes. With her arms crossed before her as a gentle guard against those who might intrude, Delia looks like a substantial woman who has come to know quite a bit about life.  Shielded in her gorgeous clothing and jewelry, the perennial armor of a wealthy woman, she is forever beyond any basic needs, but she seems to inform the artist that there is so much more to her than her fantastic facade.

Delia Spencer married Arthur Caton in 1876.  Arthur has been described as a Chicago lawyer, sportsman and clubman.  The son of one of Illinois’ first state Supreme Court justices, Arthur studied and practiced law.  Having inherited his father’s huge estate in Ottawa, Illinois, Arthur’s love for golf, as well as breeding horses and dogs, overcame any obsession he might have had for poring over statutes and dealing with demanding clients. That he was known as a “clubman” might suggest that he may have spent more than a few long nights at the Chicago Club toasting to his fortune.

Marshall Field, on the other hand, possessed little more than a silent yet pervasive brilliance that led him to become one of the richest men in the world.  He was so reticent that, according to Arthur Meeker’s wonderful book, Chicago With Love, he was reluctant to make a speech, as was expected, at one of the Catons’ grand dinner parties. When Delia realized her beloved friend was in danger of committing a social faux pas, she promptly “sprang to her feet and said: ‘Mr. Field just wants me to remind you that the White Sale starts next Monday’.”  What an amazing display of social panache, empathy and humor!

Arthur Meeker was the son of one of the first principals of Chicago’s Armour & Company. Although he did not choose to follow his father in the hugely successful meatpacking organization, he became a steadfast chronicler of society.  His legacy includes memoirs of his parents’ vibrant social life, and of their friendship with Delia. Meeker indicated that the Catons had no children: “Always an advantage to an aspiring leader of fashion – and so were able to devote all their time and money to entertaining their friends in their big, elaborate house on Calumet Avenue.” He that his mother “always declared that nobody ever gave such wonderful parties as Delia Caton. Their success was certainly principally due to the astuteness and personal charm of the hostess.”

Given the chilly atmosphere in his own home, Marshall Field must have been driven like an impeccably attired moth to the light and levity at Delia’s events.  Meeker states, “I do not know when Marshall Field first became intimate with the Catons. What is sure is that he fell in love with his friend’s wife years before he was able to marry her. Unhappy at home, he needed just such a resourceful and sympathetic woman in his life as Delia Caton.”  Writing in the early 1950s, Meeker went on to say, “Nobody now alive can tell whether she loved him in return. The gossip of the day cast the worst light on the affair; it was even absurdly asserted that an underground tunnel connected the Caton house on Calumet with the Field house on Prairie, which was just in front of it, or just back.”

Meeker confirmed the restrictive social codes of the day when he wrote, “In the Nineties, divorce was unthinkable: they had to wait for him (Arthur Caton) to die, which, distressingly, he didn’t do until 1904.”  Even the circumstances of Caton’s death are open to interpretation. It was reported he died suddenly, unexpectedly, at a New York hotel. Rumors of suicide abounded. In any case, Delia was free to marry the now-widowed Marshall Field.

Delia Caton Field, around the time of her marriage to Marshall Field

The marriage license acquired in London in 1905 indicated that Delia was 46 years old, 24 years younger than her 70-year-old fiance.  The pair married at St. Margaret’s Church in Westminster Abbey. The ceremony was quiet, and attended only by a few friends.  The newlyweds’ happiness was short-lived.  Marshall Field died in 1906. He was playing golf in a foursome that included his nephew, his secretary, and Robert Todd Lincoln and shortly after succumbed to pneumonia. It is said that the shooting death of his son, Marshall Field, Jr., allegedly at the fabled Everleigh Club brothel, also contributed to his demise.  Field’s estate was valued at $65 million. After bequests to his daughter, grandchildren and the Field Columbian Museum, Delia was to receive a tax-exempt $1 million, as well as the Field mansion on Prairie Avenue.  Lest it be interpreted that this comparatively small portion of her husband’s estate would leave her wanting, Delia also inherited from her husband and father-in-law’s substantial estates.

Unexpectedly single, Delia was free to pursue her own joys. She left Chicago, and purchased an Italianate mansion in Washington, D.C. that came to be known as the Pink Palace.  There, she hosted one of the earlier salons of the Nation’s Capital, taking her flair for entertaining to even higher social levels.

That Delia continued to exert her vitality in later years is evidenced by this portrait, provided courtesy of Chicago’s Newberry Library.  Although she is clearly well beyond middle age, she is presented as an attractive, even sexual being. In contrast to the Healy portrait of her in her youth, Delia now invites the view to come closer.  Her hands are no longer crossed before her waist. Instead, one hand appears to caress her neck while the other dangles casually.  She plays with a long string of pearls that in an earlier age would be arranged perfectly over her bodice. Part of her left breast is scandalously exposed. Delia’s hair shows touches of gray, and her face is married by a few wrinkles. However, her knowing gaze is unchanged.  She continues to be a vibrant, highly attractive woman.

Delia was not just any well-bred, wealthy lady of her time. She had lived long and well. She had endured an imperfect marriage, with her entertainments being her greatest joy. When she finally married the man who had adored her for years, she became his widow within months. Delia died in 1937, leaving an underappreciated legacy as one of Chicago’s greatest social luminaries.