Chicagoans greeted 2018 with the coldest New Year’s Day on record, with a high of 1 degree, and wind chills of -35 degrees. The frigid day was part of a cold snap that tied for the record of the longest periods of bone-chilling temperatures.  Whether we struggled this month to keep warm in our homes, trudged to work in Michelin Man-esque parkas, or huddled in our heat-blasting cars on frozen streets, we had it a bit easier than our forebears.

Records show that none of the top ten coldest days in Chicago occurred before 1900. Sure, there was snow in the good old days, but blizzards such as we saw in 1967, 1999, 2011 and 1979? Nothing remotely like them. And, although our current modes of transportation are generally safe and keep us cozy against the elements, many Chicagoans in the 19th century had a most magical way to get from place to place, or even to race:  Sleighs.

Not only did people use their sleighs to get from Point A to Point B, they actually had fun doing it. Can we say that, as we tailgate the minivan doing 25 in the passing lane during a snowfall?  Are we able to breathe in crisp, wood-scented (and horse-scented) air instead of car exhaust?  Can we marvel that we are being transported courtesy of a beautiful living being instead of an engine?

Chicago elevated sleigh-riding to an art form, and like many forms of great art, sleighing was not for the masses. Sleighs were not cheap, particularly one padded in the softest of leather. Sleighs were modeled after those from the most snowbound nations, including Scandinavia and Russia.  While Swedish and Danish varieties were fairly utilitarian, those modeled after pre-Revolution Russia were lavish in their use of furs for seating and blankets. A typical lap blanket might be made with fur from wolves, minks, tigers or bears. Tails were attached to the blankets as a decorative touch. Popular sleigh colors in the 1890s included sea green and deep red. A top-notch sleigh could cost at least $800, or around $20,000 in 2018 dollars.

Hedonism: A sleigh for one.

The quality of horse was also a huge consideration, especially if racing was involved. It was noted that millionaire Philip D. Armour preferred a pair of sleek roans to power his Victoria. The wealthy John Dupee preferred bays, while George McLaughlin insisted upon a thoroughbred trotter.  A team of well-matched horses could easily fetch $2,000.00.

A perfect pair dwarfs their sleigh.

Sleighing attire was significant, not so much from a fashion perspective, but for sheer warmth. Gentlemen might wear heavy coats in Persian lamb, bear, raccoon or sealskin. Ladies would don similar furs, and perhaps keep a ribbon tied around a high-necked collar. Hats, if any, were sleek, small, and pinned in several places. A big, floppy number would gather snow, attract the wind, and invariably fall off its wearer into a mass of slush. 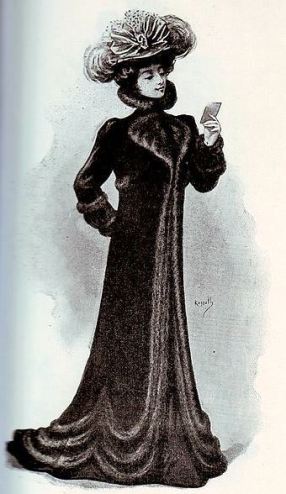 Minus the hat, an ideal sleighing coat.

A Chicago Tribune article from 1898 warns readers of the symptoms of the “Sleigh Face Epidemic,” which coincided with the onset of a snowstorm.  Per the article Sleigh Face was as potentially fatal as Bicycle Hump and Appendicitis, the former still a relative novelty.  Sleigh Face, however, was a much more expensive ailment. Symptoms included a wide-open mouth, eyes fixed dead ahead, and a flushed face. The article genially suggested that of the 1,750,000 residents of Chicago, some 1,749,000 would be glad to come down with this exclusive sickness.

The primary sleighing venues in 1898 were places like Drexel Boulevard, the Midway Plaisance, and, more recently, Lake Shore Drive and Lincoln Park. On Sunday afternoons, after attending church, spectators would gather to watch sleighs of every kind fly across the icy streets. It must have been like witnessing an impromptu gathering of Dodge Hellcats, Maseratis, Ferraris and Lamborghinis — all featuring real horsepower. 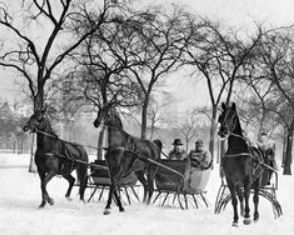 Sleighing on the Midway Plaisance.

Not all sleighs were treasured, however. The Chicago Tribune recounted the demise of a sleigh used by Napoleon in a trip from Moscow to Paris. The sleigh and its elaborate harness had been a gift from the legendary leader to a Silesian man in exchange for a small coach. The Silesian’s descendants, the Gansels, landed in Chicago, along with the sleigh.  However, upon the death of one of the Gansels, his widow took an ax to the relic because she was “tired of seeing it around.”  One can only speculate as to whether the widows’ descendants considered taking an ax to Mrs. Gansel once the realized the value of what she had chopped up for firewood.

The slaying of Napoleon’s sleigh.

By the early 1900s, sleighing had declined in popularity. The debut of the automobile resulted in sleighs being considered antiquated. Young people, once among the biggest proponents of sleighing, were now fascinated with exotic, expensive horseless carriages. A 1905 Chicago Tribune report lamented on the fall of the sleigh, citing a strike among drivers, and the catastrophic fire at the Iroquois Theater as detriments to a local economy once favorable to the potentially costly sport.

Perhaps you can still hear it on quiet snowy nights in the middle of Lincoln Park or Washington Park: the crunch of hooves on ice, the grind of metal blades, the sudden joyful noise of sleigh bells, horses snorting clouds of spray. Perhaps, if we are so fortunate, we may be treated to visions of long-gone sleighs and their riders.