For those of us who enjoyed the latest film iteration of The Great Gatsby, opportunities abound to align oneself with key elements of what I firmly believe is the Great American Novel.  At the lower end (about $30), you can buy a bottle of Moet & Chandon champagne, guzzled liberally throughout Jay G’s epic parties.  For a mere $200,000, you can own the Jazz Age diamond headpiece from Tiffany & Co.’s Gatsby Collection.

However, if you are one of the 16 English majors in the world to have made serious money, here’s your opportunity to fund a baronial existence in a Home With History.  Simply fork over $16.5 million for the Lake Forest, Illinois country home of Ginevra King, F. Scott Fitzgerald’s first love and the inspiration for Daisy “Poor boys shouldn’t think of marrying rich girls, don’t even consider it, Buster,” Buchanan. (See 2016 update below)

Dining Room: “So what is it that your people do, Mr. Fitzgerald?” 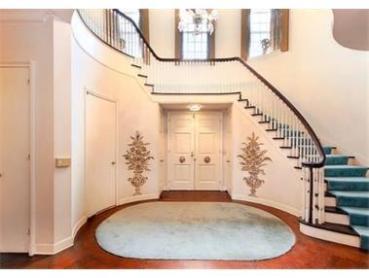 The estate, nicknamed “Kingdom Come Farm” by Ginevra’s father, Charles Garfield King, is up for grabs for the first time in many years.  The main house, an imposing sprawl of white wood frame, sits upon 45 acres.  None of them offer Lake Michigan frontage, unfortunately, but then again, you won’t have to deal with those annoying beach glass-collecting trolls creeping along your shoreline.

Ginevra spent many summer days at this estate when she and her family were not living at their long-since demolished town home at 1450 North Astor Street in Chicago.  Harold Van Doren Shaw designed the Lake Forest estate. He was the visionary behind Lake Forest’s Market Square, the first planned shopping venue in the United States.

According to James West’s excellent book, The Perfect Hour, Scott Fitzgerald visited Ginevra at Kingdom Come Farm, and received a chilly reception from Mr. & Mrs. King when he was found to be wanting of a trust fund.  Ginevra ended the romance shortly thereafter. She later married Billy Mitchell, a socially prominent World War I flying ace.  After 19 years of marriage to Mr. Mitchell, Ginevra became the wife of a Chicago department store heir.  My mother-in-law knew Ginevra through membership in a venerable philanthropic organization, and always referred to her as “that nice Mrs. Pirie.”  Apparently, Ginevra was sufficiently self-assured to always wear the same green wool, velvet-trimmed dress suit to the Service Club of Chicago’s annual meetings.  Consistent with her home, Ginevra had great bones, aged beautifully and was impervious to trendiness.  She was generous and kind, offering many of her resources to others during the Great Depression.  Unlike today’s tell-all divas, she never discussed her relationship with Fitzgerald, but perhaps these walls will talk.

Update: As of September 2016, parts of Kingdom Come Farm, or Westleigh Farm, as it is currently known, are still for sale.  Some 47 acres of the property have been approved for the development of single-family homes. The asking price has been reduced to $11.5 million. Sadly, the property seems to have deteriorated due to neglect. What looks to have been an exquisitely proportioned formal garden in back of the house has gone to seed.  Mother Nature is seen creeping up the patio and onto the walls. The home’s interiors are no longer shown on the real estate listing.  According to recent stories regarding the pending development, the home has not seen significant renovations in approximately 50 years. It is not eligible for landmark status. In January 2016, the Lake Forest Plan Commission imposed a two-year deadline for the sale of the house. If not purchased within that time frame, the home is subject to demolition.  Where is Jay Gatsby when we need him?

Mother Nature is fast encroaching upon the estate.

The home has suffered exterior damage and neglect.

Note housing developments at top.  This is one of the last large parcels of land left in Lake Forest.