To longtime residents and newcomers alike, Chicago’s cultural institutions seem to have been fixed stars in the city’s firmament. It is almost impossible to imagine a time when Chicagoans and visitors could not delight in the Art Institute, Symphony Orchestra, Lyric Opera, and countless other venues. The city’s quest for artistic viability started early on:  as soon as the mid-1800s, the city began to establish itself as the Midwest’s mecca of wealth, culture and philanthropic opportunities. The city’s progress in these areas grew exponentially after the Chicago Fire of 1871, when the need for lumber, steel, foodstuffs and department store goods further enriched already prosperous families. Many of these families, such as the Potters, Glessners, Armours, Hamills and Fields, had the prescience to help build prestigious cultural institutions that thrive to this day.

By the 1880s, an inordinately large percentage of Chicago’s monied families chose Prairie Avenue as the place to build their palaces.  Although the phrase “Keeping up with the Jones” refers to the Jones family of New York City that produced novelist Edith Wharton, there were plenty of Jones counterparts residing in the not-so-little houses on the Prairie.

While their spouses were reigning over their factories, stockyards and stores, the ladies of Prairie Avenue sought to create a vibrant, elegant social environment to compete with, if not rival, those of New York, Philadelphia and Boston. The earliest social functions were not entire worthy of the storied gatherings back East.  In Emmett Dedmon’s fascinating book, Chicago, reference is made to one Charles Fenno Hoffman, who described a typical social event: “At these Chicago cotillions, you might see a veteran officer in full uniform balancing a tradesman’s daughter still in her short frock and trousers, while there the golden aiguillette of a handsome surgeon flapped in unison with the glass beads upon a scrawny neck of fifty … the high placed buttons of a linsey woolsey coat would be dos a dos to the elegantly turned shoulders of a delicate southern girl.”  However, what the city may have lacked in pedigree, it more than compensated in money and visionary benefactors.

As Chicago’s elite sought to force showy hothouse flowers from its frontier town roots, they began to cultivate the rudiments of culture on the shores of Lake Michigan. Some of the city’s wealthiest inhabitants had music and art imbued in them from educations in the East; others were ardent students of the city’s early arbiters of taste. One way or another, it became incumbent upon Chicago’s most successful citizens to transform what was once a backwater into a showcase of the arts.

Then, as now, a successful opera company was one of the bellwethers of a young metropolis. Chicago’s first opera house opened in 1865, but was destroyed in the Chicago Fire. Its successor, Louis Sullivan’s extraordinary Auditorium, opened in 1889.  Theodore Thomas founded the Chicago Symphony Orchestra (CSO) in 1891.  Concurrent with the 1893 Columbian Exposition, an event that signified that Chicago had truly arrived as a world-class city, the Art Institute of Chicago moved into its venerable headquarters on Michigan Avenue at Adams Street.  The Boston architectural firm of Shepley, Rutan and Coolidge provided a Renaissance design so appropriate for Chicago’s rebirth after its devastation by fire only 20 years prior. 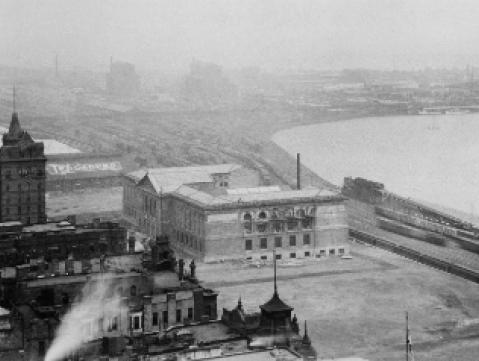 Not surprisingly, the families of Prairie Avenue played significant roles in Chicago’s social and cultural ascendancy. Upon the formation of the CSO, John and Frances Glessner pledged ardent support behind the orchestra and its founder, Theodore Thomas. Mr. Glessner served as one of the original 50 guarantors of the CSO, providing the fledgling organization with $1,000.00 per year against the host of losses it initially incurred. He was instrumental, so to speak, in the construction of the orchestra’s home on Michigan Avenue. Mr. Thomas was a frequent guest at the Glessners’ homes, not only on Prairie Avenue, but in the families’ summer residences in New Hampshire.  The families’ friendship was so strong that upon Mr. Thomas’ death in 1904, Mrs. Thomas presented the Glessners with her husband’s baton.  The precious artifact is on display at the Glessner House Museum.

George Armour was one of the initial patrons of the Chicago Academy of Fine Arts, the predecessor to the Art Institute of Chicago. Countless Prairie Avenue luminaries lended their business acumen and political connections to launch the 1893 Columbian Exposition, which brought an estimated 26 million visitors to Chicago.  Among the Exposition’s major underwriters were Marshall Field, Philp D. Armour and Gustavus Swift.

The Field Museum, another initial outgrowth of the Columbian Exposition, would not have grown into a world-renowned educational institution without the support of its namesake, Marshall Field, or the generosity of his Prairie Avenue friend and neighbor, George Pullman.

One of Marshall Field’s most brilliant executives, John G. Shedd, visited fascinating aquariums in his travels through major European cities. He concluded that Chicago should have not only its own institution to house aquatic animals, but one that rivaled all others throughout the world.  He donated at least $2 million toward his masterpiece.  Although Mr. Shedd died before his aquarium was completed, the Shedd Aquarium stands as a beloved, ever-evolving tribute to this Chicagoan’s generosity. 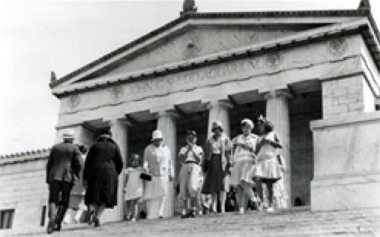 A bevy of 1920s cuties enjoyed the Shedd.

Even entities as far-flung as the Archaeological Institute of America thrived under the aegis of Prairie Avenue residents.  An 1888 list of its Society members reads like a Who’s Who of Chicago’s upper echelon, including Prairie Avenue residents Armour, Bartlett, Buckingham, Ellis, Field, Frank, Glessner, Hamill, Harvey, Hutchinson and countless more.

As evidenced in previous installments in this series, the contributions of one group of citizens living for a time on one Chicago street cannot be overestimated.